For Your Consideration Social Media Toolkit

Web Design UI/UX Design
Project Overview
The Universal Studios Group came to our team at GTMA to create an interactive application to promote the 2021 Emmy Awards. The purpose is for TV crew members and actors to use the app to promote their show and mention “For Your Consideration” for the Emmy nominations. The app generates a series of branded images or videos that the user can post to social media to promote their show(s).

The app is exclusive for members of NBC Universal and actors of the shows that are nominated for the 2021 Emmy Awards.
My Contributions
As the UI/UX designer at GTMA, my responsibility was to take the project scope and work with the development team on creating a simple user experience with a branded interface. It was very important to us to make a product that is simple to use and produces content quickly. In the end our team was able to make Universal Studios Group very happy with the intuitiveness of the interface and smooth process.

Who is intended to use the App

Actors and Directors
Actors and directors tend to have a large following on social media. It is important to show new and exciting content to their audience. However, they are very busy people and will not care about a platform that takes time learning or does not operate quickly enough. The app will need to fit into their busy lifestyle and feel intuitive the second they are on the app.
TV Crew Members
While this group may not have as large of a following as actors and directors, they are usually active on social media. People love to see the backstage work that goes behind a show. Many of these members also work on multiple shows that would be nominated. These members need a platform that can easily share what they are working on, and be able to promote more than one show. They are also busy, so keeping an intuitive interface and flow is key.
Site Map 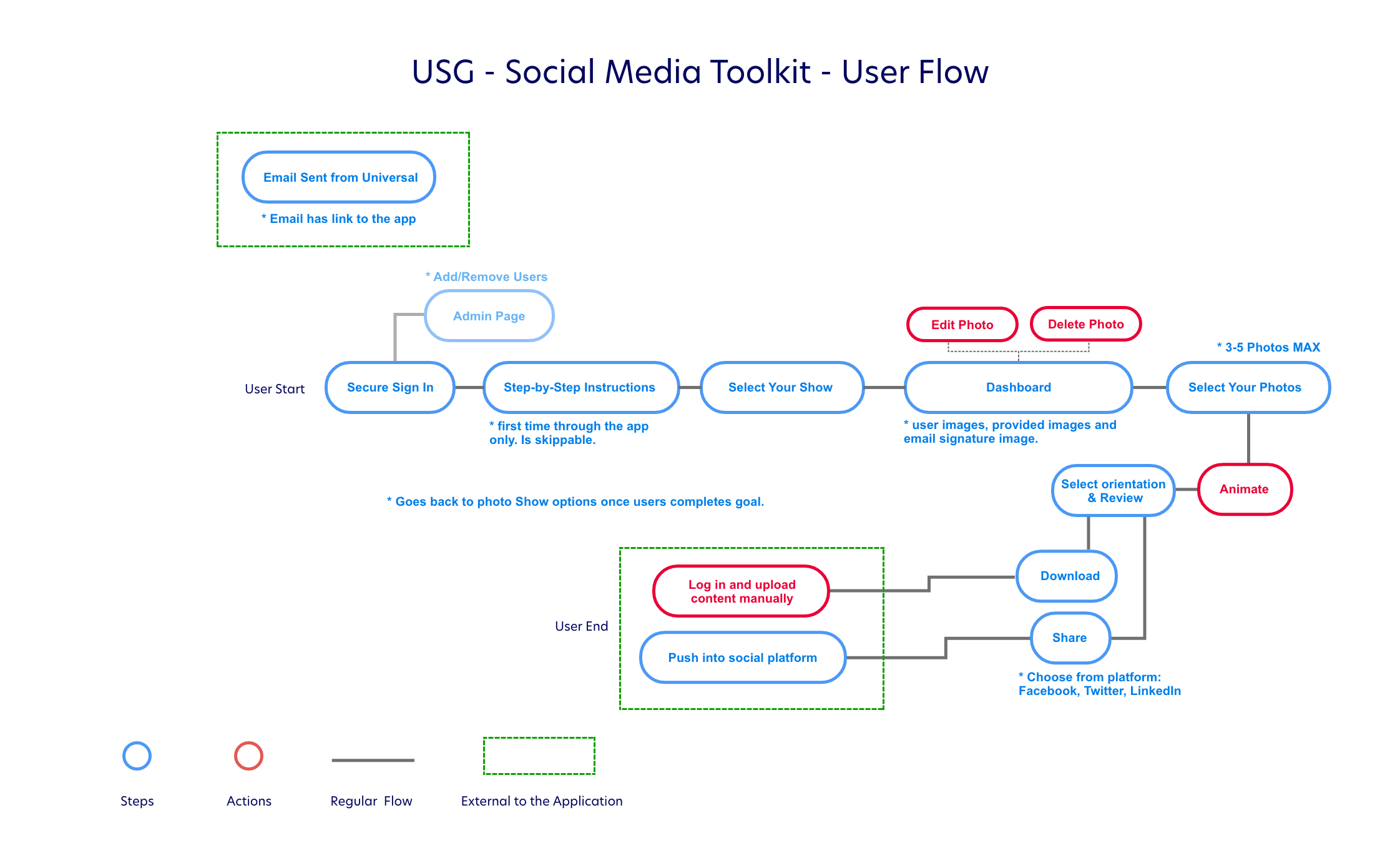 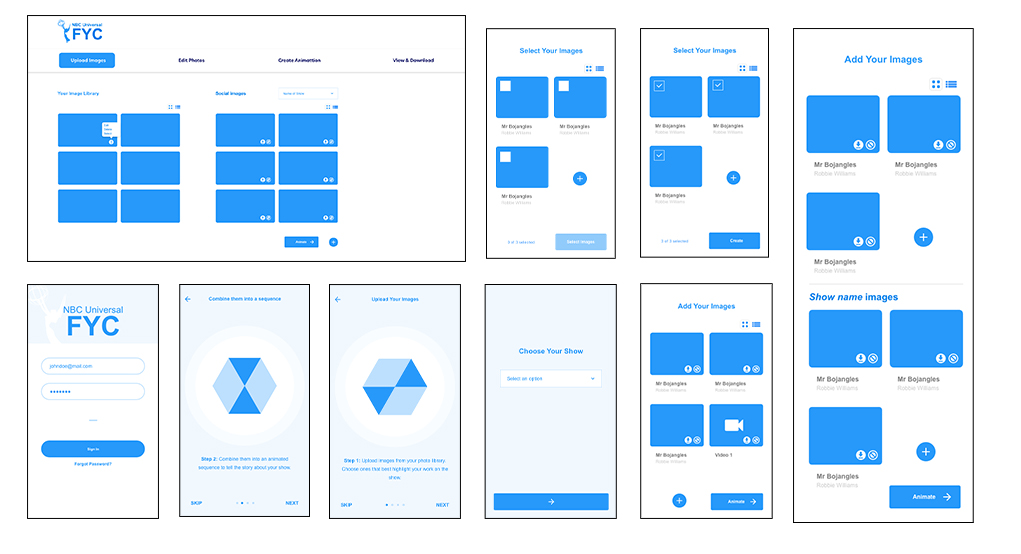 Mobile and Desktop Drafts
Goals for the app.
- Create an interesting branded slideshow or image that will catch people’s attention on social media in hopes to be in consideration for nomination for the Emmy Awards.

- For TV crew members and actors to get the word out about their show being nominated for the Emmys.  Create more interaction for

- Emmy votersHave an effortless flow for the users since they are using an outside app.

- Create a seamless system that will make generating the content seem like basic steps for the user.
Obstacles
- How much freedom do we give the user in regards to photos?

- So needing to create a flow that also works for them.

- Giving users a reason to use a third party app to create social content.

- Fitting all possible content onto one screen that displays everything that the user would need.

What was working?
- The log-in made sense and was a displays user goals.
‍
- We discretely but accessibly placed important information such as photo guidelines or a help section that they can reach at any point of the process.
‍
- Guiding the user along with clear written steps.

- Interactive elements are highlighted prominently with yellow.
What wasn't working
- The interface was over complicating the users goal. There were too many active areas and steps that may push the user away once on the app.

- Variety of buttons and highlighted touch points may confuse the user on where to go next.

- We could not have the app upload to all platform so the challenge was if it would be clear that some buttons would download content and others would share directly on social media.

‍
Solution: Think Basic
While working with the team and pondering over what the user’s steps would be, we had to make sure the user was confined to the path to creating their content. We decided to systematically have interactions allowed / not allowed on each step. For example, when the user lands on the main page after logging in they are able to change their show or download their email signature; however, they cannot move to the next step unless they upload photos. This was accomplished by having dim buttons that were only active if the user did an intended task. We also included short directions on the left hand side that lets them know what the next step should be.
‍
Many of the obstacles faced were from over complicating the goal and what the user should know. In the end we were able to accomplish three steps that the user completes in order to create their content. If the user wanted to, they could complete their journey in 5-6 clicks. Which is perfect for crew members, actors, and directors to create content and share it quickly. 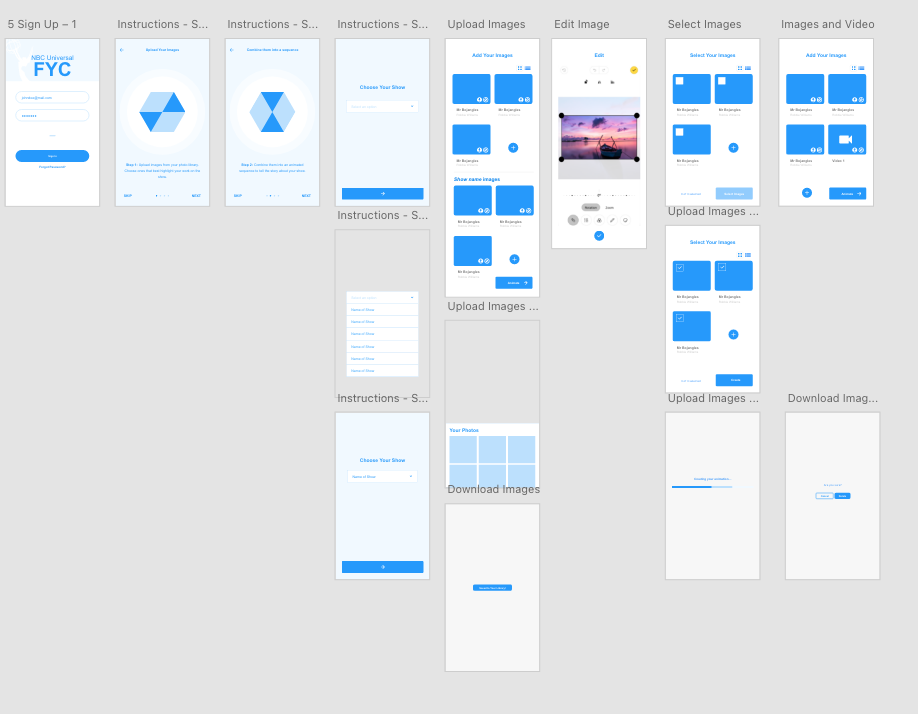 Live website prototype.
Secure login and interactive intro.
The app is secure for the users in order to ensure the safety of use. The TV crew members and actors will receive an email with instructions on how to log in and how the app functions. When the user first logs into their account they will be greeted by an animated series of images and the Universal Studio Group logo. The users can enter what show they were on then accept the code of conduct for the app's use. 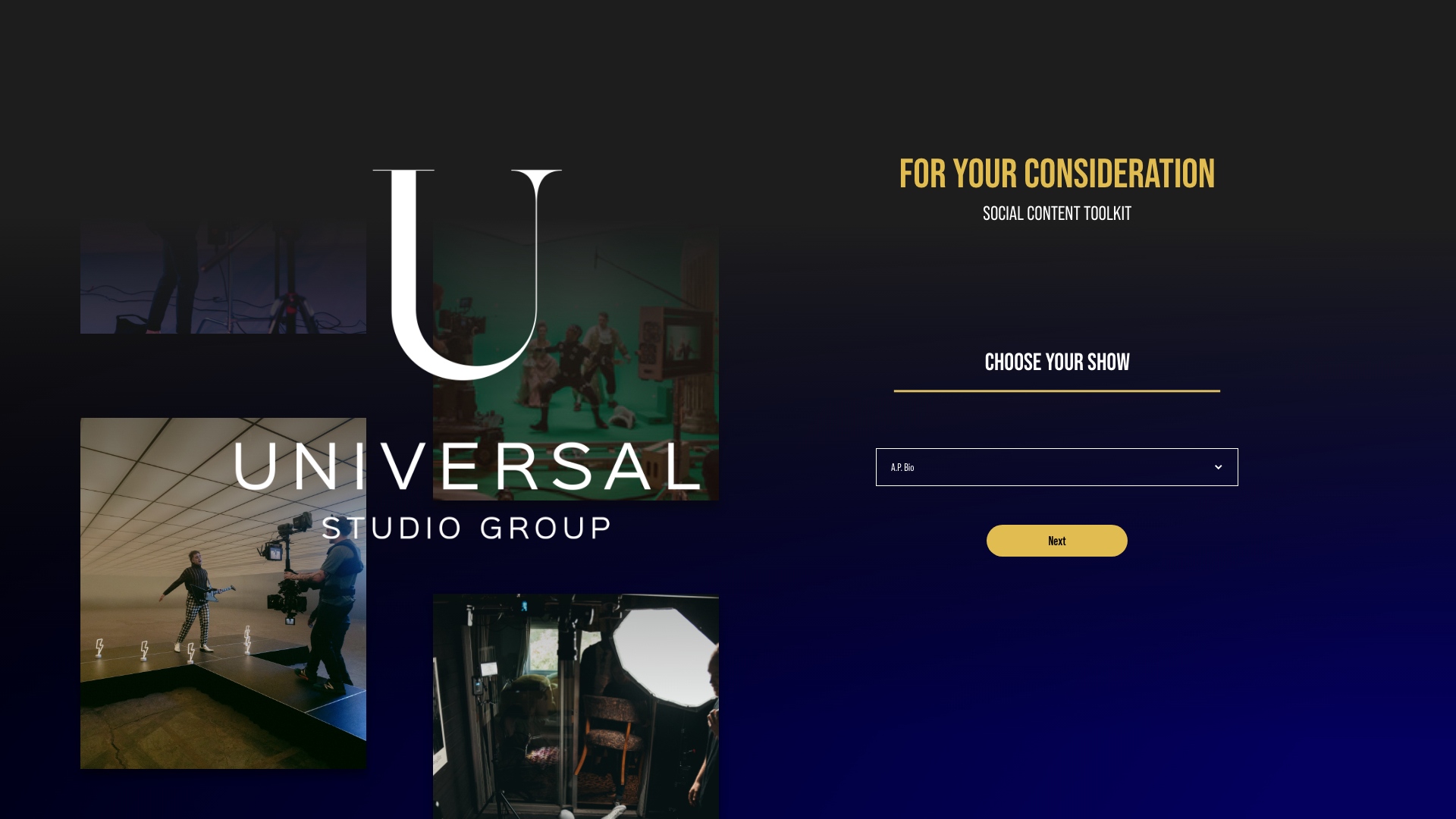 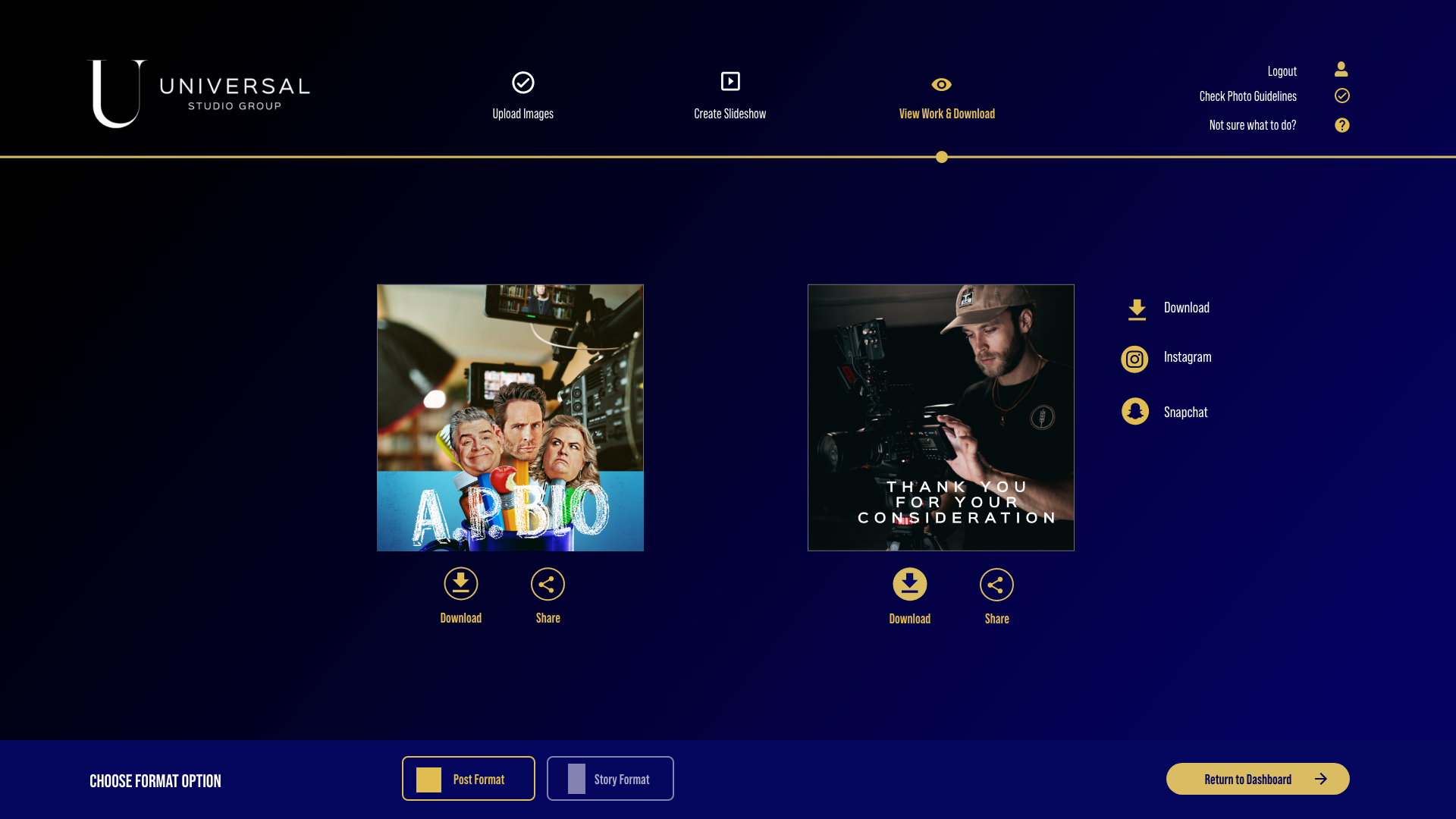 Final products.
The final product will consist of either a branded show image or multiple animated slideshows that have the show's brand interacting with the image. The user can then decide to post it directly to social media or if they would like download on their device.
Returning users or users that work on multiple shows.
For the individuals who have worked on multiple shows or would like to create more content using our toolkit, we created the interface to change between shows. The user can change their choice before animating and the app will save their content in their account. 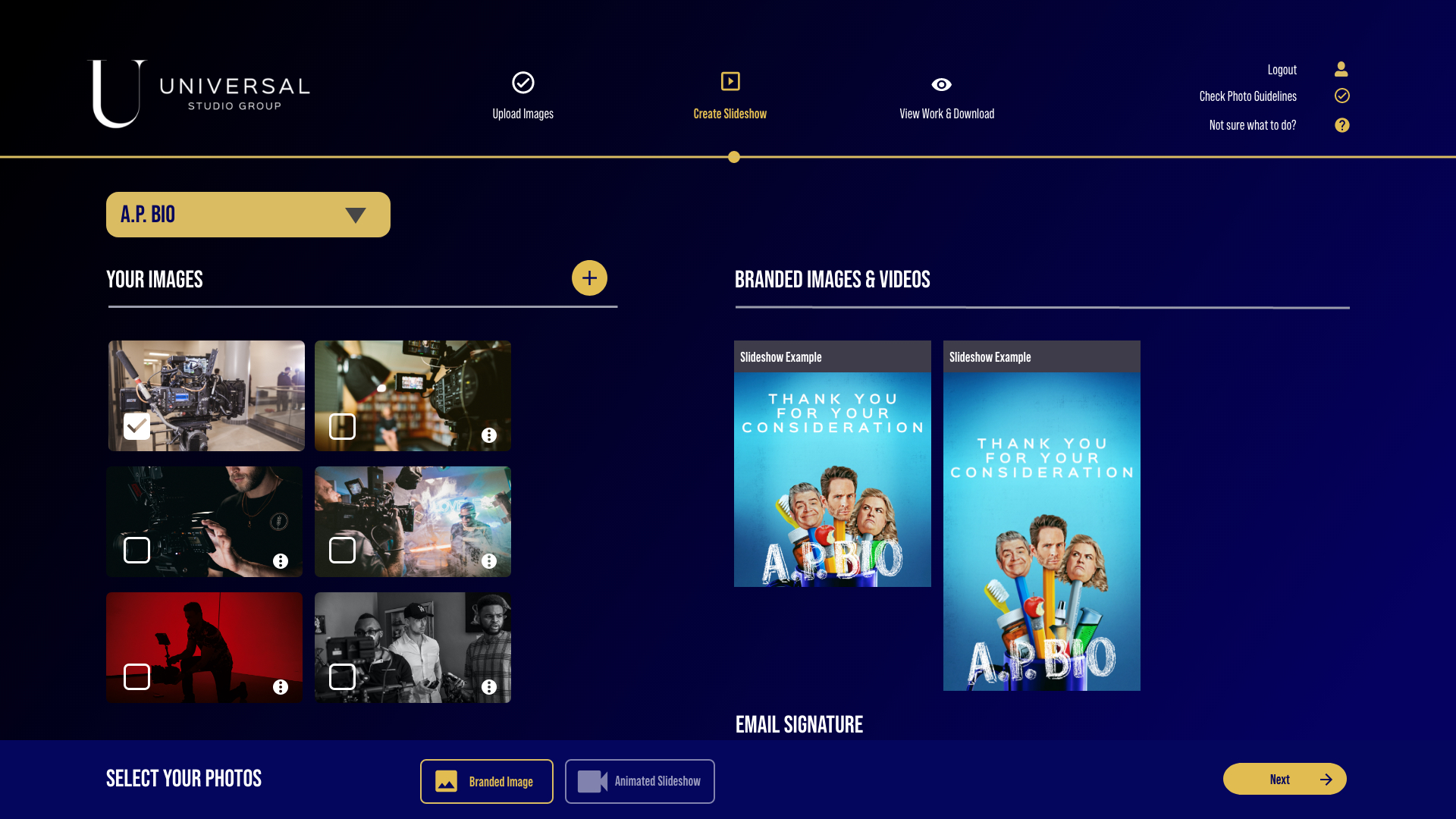 What if I had more time?
The difficulty of this project came from the user experience. While most of the time was focused on ensuring a properly intuitive app, I wish that I could have had more time experimenting with buttons and button types. Throughout the app, the buttons play a vital role in completing the user’s goals. However, hover states and button variety are lacking in the design and if I could go back, it would be one of the first things that I plan. Overall this project was a lovely experience working with large scale clients and creating a product that they are excited to share.

Want to work together?

If you like what you see and want to work together, get in touch!